Ballot the Only Route to Presidency, Uhuru Tells Raila 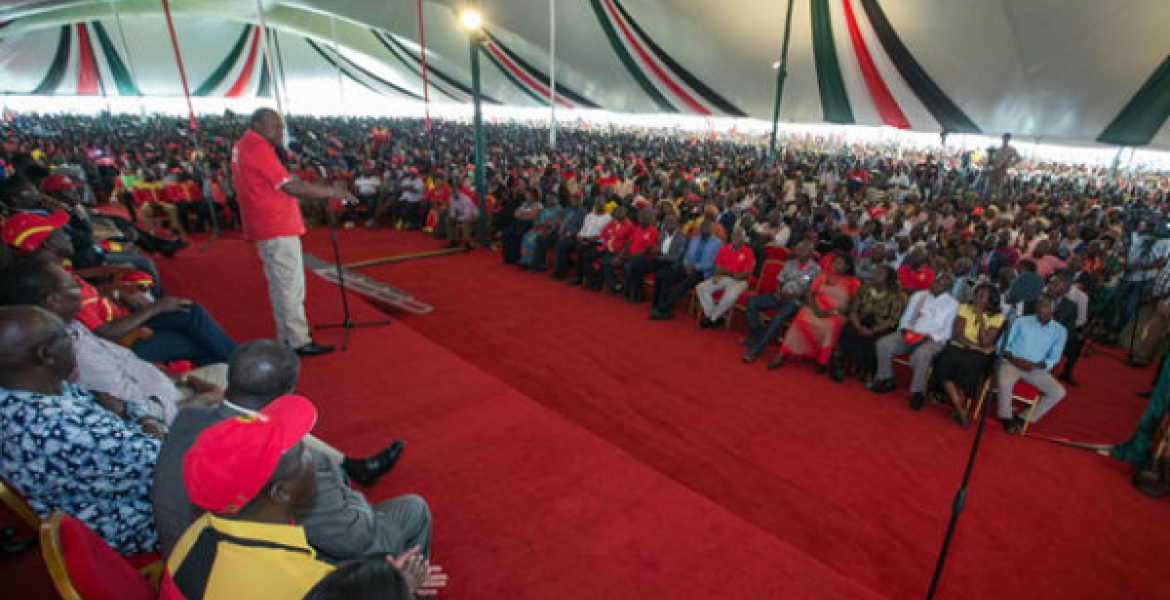 President Uhuru Kenyatta has told his nemesis Raila Odinga that the only way to win the Presidency is by ballot and not through the back door.

Speaking in Kakamega County on Saturday where he met about 20,000 Western Kenya opinion leaders, the Head of State said that the attempts by the National Super Alliance leader to have a grand coalition government will crumble, adding that October 26th election will go on as planned.

“There is no other route to the presidency except through the ballot box,” President Kenyatta reminded the Opposition leader.

The President further defended the proposed amendment on electoral laws, arguing that they will enhance transparency in the repeat poll and in the future elections.

“The changes will entrench transparency in the electoral process and guarantee free, fair and credible elections,” President Kenyatta said as he told Opposition leader Raila Odinga to stop interfering with the October 26 fresh election in the hope getting powers through the back door.

On his part, Deputy President William Ruto accused the opposition of dividing Kenyans on ethnic grounds, instead of focusing on agenda that can unite the people.

He asked the Western Kenya leaders to rally behind Jubilee and President Uhuru as he seeks a second term in office.

“With open arms, we have come here to tell you that we are ready to work with you. The outdated politics of tribalism has no place in the Kenya of today,"

A host of former Opposition lieutenants led by Paul Otuoma, Ababu Namwamba, Alfred Khangati and Moses Akaranga urged the community to abandon the opposition for Jubilee.

The meeting brought together leaders from Western Kenya counties of Kakamega, Busia, Bungoma and Vihiga.

I withdraw my vote from NASA. You have showed consistence and have made my leader Baba look damn. Baba you have no vision, you lack agenda. I am disjointed and effective now I am jubilee. Baba you are disgrace and you are a shame for our country Kenya. This jubilee continues to campaign and give massess of people their agenda. That is right thing to do. to hell with NASA and you have done nothing but invoke violence and demonstrations. Bure kabisa i don't know why i defended this party before. I am glad to come to jubilee. Luo my friends please join me to a party that means well for kenyans

Why do you lecture baba like he is your son.This is not news a corrupt free IEBC is what NASA is demanding so that we can send you home through the ballot now you know

You're Correct for the 1st time Uhunye. Ballot fair and square; and not Rigging or Vifaranga vya Computer like on 8/8/17.

@Guest1 et. al., keep on fooling yourselves by consuming every nonsense your evil crazy leader spreads. RAO can fool all his worshippers all the time; but he can't and will never fool majority of Kenyans anymore as he did in 2007/8!!!!!