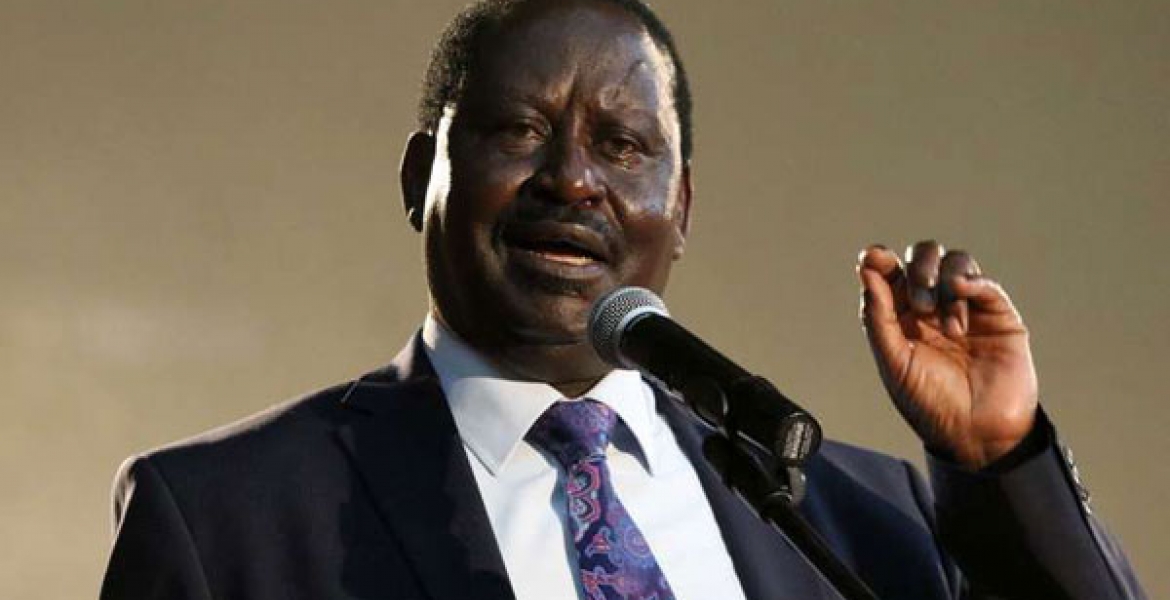 I am ready for the repeat presidential election only if you will drop the proposed amendments on the election laws, National Super Alliance (NASA) presidential candidate Raila has told President Uhuru.

Speaking on on Friday, the former Prime Minister described the two bills the Jubilee Party has tabled in the National Assembly as “retrogressive” and asked President Uhuru to stop debate on Elections Act (Amendment) Bill 2017 and Election Offences (Amendment) Bill 2017.

Raila termed the attempt by the ruling party as a scheme to water down the Constitution and take the country back to the dark days. “We don't want someone who changes the rules in the middle of the game. There is no need to change the goalposts when the Supreme Court has already implicated the IEBC,” said Raila.

Speaking after holding a meeting with religious leaders at the All Saints Cathedral in Nairobi, the ODM leader said the proposed law was an act of “extreme provocation”, which was unacceptable. He dispelled claims that he was power hungry following his plan to stage nationwide demos. “I won the elections in 2007 and in 2013 but compromised for the sake of the country. Even when Kreigler came in 2007, he opined that he was not coming to ask whether I won or not. I am not someone who is power hungry,” he said.

Earlier, Raila held discussions with the US Ambassador to Kenya Robert Godec and European Union chief election observer mission to Kenya Ms Marietje Schaake over the current political situation in the country.

The LAWS ought to be enacted now, to protect Kenya, even post Railaism. They should not be withdrawn to accommodate short term covetousness and intemperance for power.

Crying baby,whiner,loser,inciter,murderer,fake Joshua and owner of fake Canaan, political conman, swindler and prostitute, liar, thief, Lord of Poverty, broke presidential candidate and the deceiver in chief at it again.
Goosh! When does he go to sleep? Full of bull shit!

Vitendawili, we as Gikuyus can not hold the rest of the tribes coz we feel that leadership MUST be from Mumbi. You are very stupid. Kenyatta changed laws that way in 1966. When he died Moi followed those laws. It was too difficult for us to come to power, Njonjo tried and failed. 82 coup organized by Kiuks (carried out by Ochuka) also failed to remove Moi. It was Raila who helped us remove Moi thro NARC in 2002. Therefore we have to accept our weaknesses and let Raila be sworn in now. We as Gikuyus we were busy amassing wealth and being proud without the knowledge of the law. This was our weaknesses. We ought to have changed the laws before elections but not now. We MUST accept and move on.

You lost me at 82 coup was organized by Kiuks.

@Njeri Rose Kamau, Are you out of your mind 'eti sworn in?' If he win on 26th. Then he will be president if he doesn't go home for good. Hiyo wako peleka bali does not work anywhere in the world

Njeri Rose Kamau: What script are you reading from. You are completely misplaced. And call the other guy stupid! You should go and marry in Kisumu and live there happily.

I agree with what you say Njeri. It's about time Kikuyu's let other tribe rule. Kenya does not belong to Kikuyu and Kalenjins only. The two tribes are the most corrupt humans one can imagine. Hon. Raila Odinga can be far much better than Uhuru that is why many Kikuyu's like you Njeri are turning against the culture of tribalism. Raila will become our next President whether Kikuyu's want it or not. Long live Kenya, Long live Odinga

The only people oppressing Luos is a) Raila b) Luos themselves. What happens when a Luo tries to take a different route from the wishes of Raila? I have been in and out of the diaspora for more years than I care to say but rarely meet any Luos investing in Kenya.......start putting your money where your mouth is...I spent so much time with Luo friends, was just with one an hour ago. What I say here I say when I am with them....their come back to me is almost always that entrepreneurship is not in their blood.
My very close Luo friend once confided in me that his dad has nothing to show for over $100,000 he has sent home in the last 10 years....rumor has it that dad decided to marry a younger wife with the money he has been receiving...my buddy's words, not mine. BTW, Kyuks have their own sob stories to tell but we somehow keep plugging along.

I applaud your attempt to summarize history, but unfortunately, you have tried to sanitize some falsehoods with some true historical facts, then forced a conclusion on why we should accept my baba to be sworn in. As much as I love baba, truth be told, he only inspires my more violent instincts rather than my enterprise or nation building instincts. That builds tension between me and my many friends from different tribal background, which sort of annoys me. Baba go easy on the threats and build your brand.

Amendments must be enacted. This is more NASA trickery to open doors for nullification number 2. Jubilee must refuse. The tiger is cornered and must be given no escape. If allowed to escape, it will bite you hard.

More bullshit from the number one conman in the country. If you don't do this or that I won't eat my dinner. Sounds like my four years old son. Stop all these bullshit. You don't own the country. Go be a king somewhere else.

RAO is just a shameless puppet and mental slave of his US, UK and EU masters. Now, after going to cry and whine to his masters and being warned that he has no legal recourse but to participate in the repeat election, he has changed his chest thumping foolishness that there will be no election until his stupid "irreducible minimum conditions" are all met! What a clown!! And now he dares give the president a silly ultimatum after recoiling his tail about his nonsensical childish conditions??? The President should loud and clearly tell him off to go take a hike or call his brain dead hooligans for mass action! Then, the police and other security apparatus will be ready for them to bring nyoko nyoko waone sirikali iko na wenyewe. Our country can't anymore afford to have one crazy and reckless demagogue continue to sabotage peace and wellbeing of law abiding Kenyans as if his puking ass is greater than Kenya itself. Enough is enough!!

Raila's quest for power in the last few elections have cost the country dearly. This time around, the stock market is down, people are not spending and some even taking their money out of country. We cannot continue being in election mode for years....we need to be on economic mode!

Kenya is bigger than any individual may it be whoever. Even Field Marshall Dedan Kimathi Waciuri wouldn't agree to such changes of Goalpost by this colonial masters. That should not happen now that the so called Jubilee leadership with desperate and its Emotional, Angry, Mischevious supporters that Election Laws should be done now to water down and weaken the Constitution. We need strong basis of Laws regardless of our self seeking interest but for the sake of the Nation! StatesMen and Women who see far and have interest of the Nation will tell you the same. Those accusing Raila of Power Hungry what are they if not more power Hungry than Raila? They bungle the election for what if they aren't want power through hoook or crook.

Mambo kwisha!!!! Parliament, enact those laws tomorrow and take it to the president for the signatures to become law of the land he is waiting for you. Jamaa amenaswa. Nenda kampumzike Bondo. Ruto and Uhuru said it very clearly last week, hata wao ni wanaume and there is a government in place and we can clearly see that now. Fanya fujo ama ulete nyokonyoko sasa uone. Uhuru said business not as usual. Mchezo kado sasa. They have been very nice and patient with you until you pushed them to a breaking point.

Baba why are you panicking. Why even waste time giving Uhuru conditions.These people are thieves and will move the goal post everytime. Remember they killed Chris Msando and will do what it takes to get to power. All this laws and amendments they are making are not set in stone.It is not over yet wacha wamangamange. Make them believe all is well and then surprise them. Without a corrupt IEBC they have no hope and should be concentrating on building their KCA.Remember one of their symbols is literally an ass (punda) na asante ya punda ni mateke. Kwa nini uiname achana nao. 26th is not far watajinyoa na huo wembe wao.

@Anonymous,you seem to have a twin but I can tell you are the evil one. Never kill the good twin. Or maybe you have a multiple personality disorder. Your evil side we shall call it Akinyi. Good side is Wanjiku.

JP beware of these gimmicks. Do not play into hands of your detractor. There is one and only one thing in his mind-winning or cheating into a loss. This is the time to religiously drive the tent-pin to the ground

When will RAO start campaigning.Time is running out.

Change the law so that those who preconcieved and introduced the irregularities & Ilegalities just before election through laws on result transmission do not get a second chance at failing the nation after the repeat election.

Kenyans pray for truth not to be manipulated through our very legal and constitutional avenues supposed to enhance national survival, integrity and well being of her citizens.
The tyranny of deception must be stopped through transparent election laws now before parliament whether baba wants it or not.

Save Kenya from political, legal and fundamentslist conmen and women. and the in-betweens.

Raila, this time you don't have to 'compromise for the sake of the country'. You have another shot at the presidency thanks to Maraga. Campaign and win this thing cos no one is handing it to you just because you imagine that you 'won'. Conditions will not help you. Even Maraga is a big fan of 'fidelity to the law' so let the law work. Hii maneno ya vitisho na fitina kila siku wacha.

A new legislation become retrospective if its applied against earlier cases. Explain how the amendment bills have suggested that the new changes will be applied against the past cases i.e petition from the 8 Aug 2017 elections. Kenyans need to be serious. How does a returning officer who does not sign a form as required become liable? We cannot be complaining about how the "process" involved in the election exercise is fault yet at the same time not want to fix the problem in a legislative manner. Pure waste of peoples time getting people go through the election process whilst we so well know what is the likelihood of similar faults or errors intended or not are capable of re-occurring. Who truly has the interests of ordinary Kenyans at heart among these politicians!