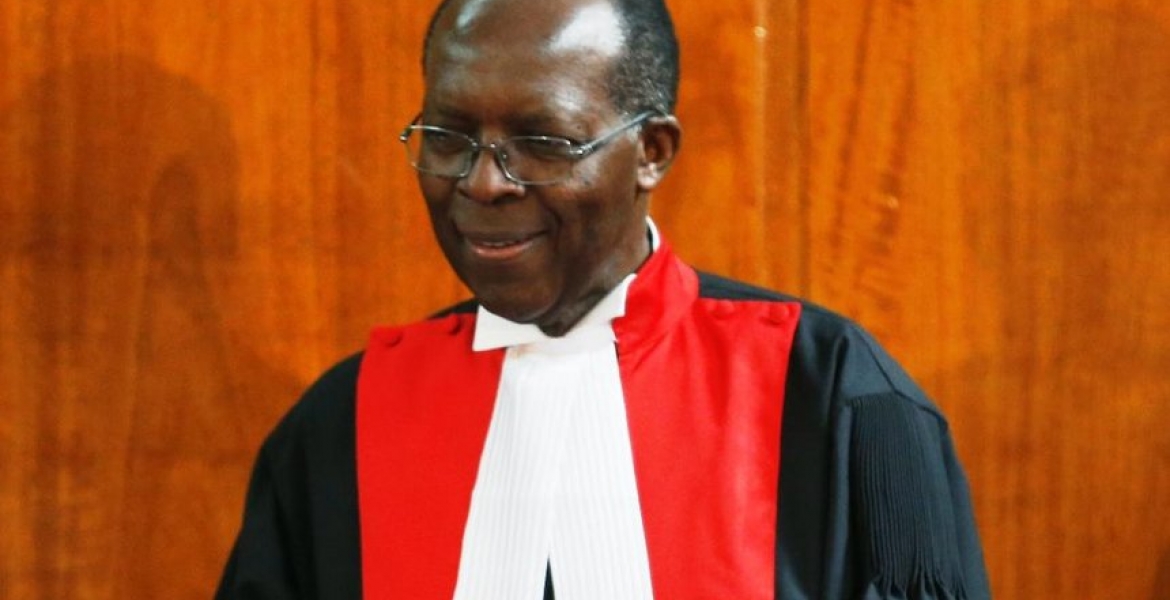 Supreme Court judge Justice Jackton Ojwang differed with the decision of the majority to overturn the victory of Uhuru Kenyatta, saying it was political and not based on the law.

The former University of Nairobi don rubbished the verdict by his four colleagues, saying it failed to consider the Bill of Rights.

“This was a political decision. It is not a product of any juristic process. It was devoid of any legal analysis,” said Justice Ojwang as he read his over two-hour ruling.

“In my considered opinion, judges should focus their attention on the intellectual and jurisprudence rather than emotions by the citizens and political agencies.” He added.

Ojwang noted that the case filed by opposition chief Raila Odinga seeking to overturn the election of President Kenyatta after August 8th elections, relied on a limited number of contentions.

The majority judges said they annulled Uhuru’s victory because the election lacked integrity, therefore it ought to be invalidated, but Ojwang poked holes on their determination.

“Such claims invoke the question; how is the court to be guided?” Justice Ojwang said.

Raila failed to prove his case and only made ‘wide claims’ hinged only on one pillar of the electoral process — transmission of results, Ojwang said.

“Even though there were procedural challenges resulting from human errors, it was not enough to warrant nullification of the elections,” Ojwang said.

“I am of the opinion the majority decision failed to resonate with the Constitution. The case was not valid and was based on weak grounds.”

To him, the August poll was held in an entirely credible manner and Odinga’s ‘broad claims’ would not warrant its cancellation.

He absolved IEBC chairman Wafula Chebukati saying he discharged his role within the law.

“IEBC chairman is mandated to declare results within seven days. Throughout the process, he discharged his mandate in accordance with the law.”

“The court has to consider whether such contentions should be the basis for annulling the outcome of the presidential election because it is the Constitution that gives the peoples the right to find a pacific, rationale and humane regulatory structure for governance.”

“The Constitution safeguards certain rights and values. It safeguards the rule of law, democracy and participation of the people.”

He noted that the Constitution says every adult has a right, without unreasonable restriction, to vote by secret ballot in any election, and to be a candidate for public office.”

“The Constitution entrusts the interpretative mandate to courts to which, for the faithful discharge of its tasks, voters have entrusted the adjudicative sovereignty," Ojwang said.

“The law provides the court shall adopt the interpretation that most favours the fundamental rights. The Supreme Court, which is taking such an interpretation just like any other court, is under obligation to promote values that underline an open democratic society based on human dignity, quality, equity and freedom.”

He said the majority should have made its determination without what he termed as undue regard to procedural technicalities.

“The court, in its decisions, should always promote constitutional values, rule of law, human rights, fundamental freedoms as spelt out in the Bill of Rights and good governance."

Mr. JUstice, your comment amounts to conduct unbecoming for the office you hold and does not deserve further response.

Congratulations Justice Ojwang and Njoki Ndungu. Certainly a good breath of much needed reasoned Judgement.It is my hope that the second time around.Some of the Judges that voted in the Majority will have the Moral Courage to as well have fidelity to the clear will of the Kenyan People.We all should play our part to advance the course of Peace and Stability in the Country.Supreme Court Justices should not allow themselves to carry the dirty political water for the opposition demagogue in Kenya.We all lived through 2007-2008, we know for sure that this opposition demagogue has been known to drag Kenya through depths of destruction that nobody would ever want to see happen again in Kenya.Therefore the Judges of the supreme court need to say NO to him.They need to tell the opposition, enough is enough.We will not allow you to keep dragging Kenya into a state of uncertainty and lack of stability.This is the message that the Majority of the Jubilee voters are indeed sending by voting for UHURU and RUTO.

It is indeed sad when a supreme Court judge makes inflammatory statements all for 15 mins of Fame.The ruling was 4 against 2 the majority won and 4 heads are better than two.You differed with your boss and colleagues but then again you are entitled to your opinion .Write a book make a movie or even run for political office while Kenyans still remember who you are.If the concept of an independent judiciary is alien to you it is best you resign

Kim the two wakora judges muilu n lenaola won't hear the next case if it goes to supreme,Remember they r tainted coz they were bribed!I think the videos,texts from that ngumu dude will b made public soon so even maraga mite not survive by then.But watch this space.