There Was No Basis to Upset the Will of the Voter, Says Justice Njoki Ndung'u 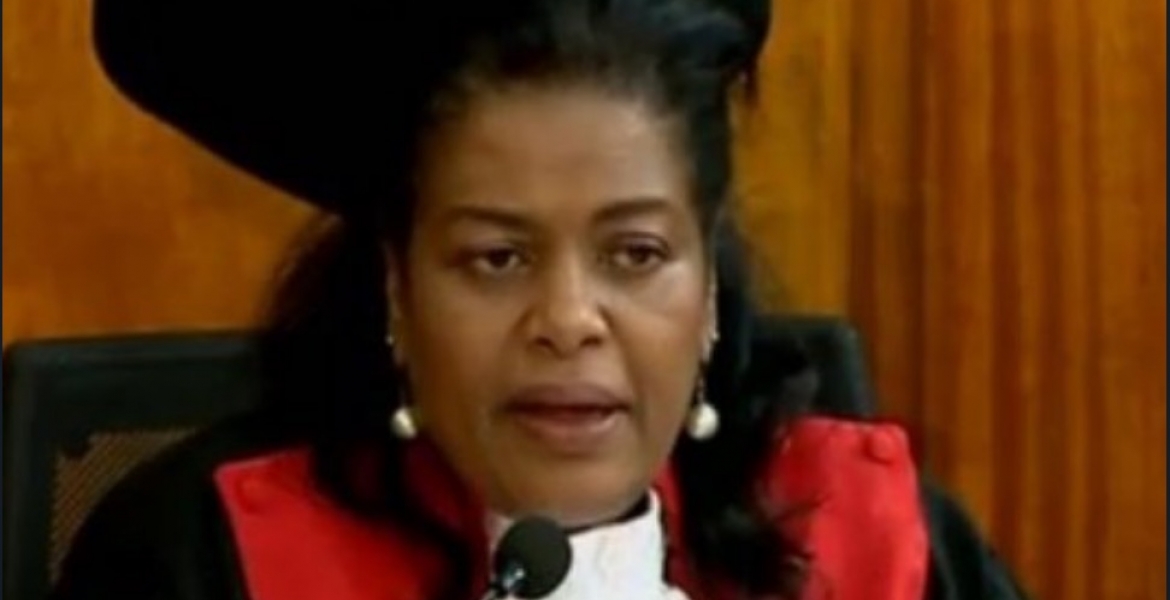 In perhaps one of the Supreme Court’s most comprehensive and compelling judgements, Njoki Ndung'u repeated time and again, that the will of the voter is supreme and in the absence of evidence, a Court must not interfere with the people’s choice.

She analyzed the entire body of evidence deposited in Court by the IEBC on 20th September, 2017, 48 hours after the Petition was filed against the allegations by Raila Odinga and noted that the Forms used to declare the elections were all proper in Form and content and the Majority did not therefore have a basis to overturn the election of President Uhuru Kenyatta.

The judge considered the role of the Supreme Court in hearing a presidential election petition and noted that it was mandatory for the Court to make its determination only after thorough and proper consideration of the evidence, She was of the view that the Majority proceeded with the determination of the case akin to a Court sitting on Appeal. The majority had no reference to the primary evidence filed in Court soon after the Petition, which proved that the election was free and fair.

In her opinion, Kenya’s electoral system is primarily manual with a complementary mechanism of technology. Therefore in the areas that were not covered by 3G and 4G Network (11,000 polling stations), manual transmission of results was the proper mode of result transmission. She recommended a legislative reconsideration of the electoral law to clarify that technology is secondary to the manual transmission system.

She also explained the verification process in elections and indicated that there are various agents of verification including the IEBC, observers, the media, the public and the election court (any Court hearing an election petition). Therefore lack of security features or signatures from agents was not, by itself a reason to invalidate the election in a scheme of interlocking verification mechanisms. Nevertheless, she conducted a comprehensive analysis of all the 291 Forms 34B and the disputed Forms 34A and noted that the Forms were proper and where there were omissions, the same could not affect the result of the election. She emphasized that where the Court was in doubt, inspection of the ballot was essential.

In any event, she was of the opinion that the Court had powers to inspect other election material to verify the integrity of the elections. There was a verifiable paper trail which the Court could use to verify the various allegations and which was not used. The effect of the Judgement was to deny Kenyans their right to franchise.

Justice Njoki took issue with a part of the Majority that threatened to nullify a repeat election if the same errors occurred. Her view was that all the arms of government are reinforcing of each other and the Supreme Court as part of the Judiciary should not threaten parties with the prospective likelihood to appear before it in the future.

The result of the election was never in issue and the same was not shown to have been affected by the alleged irregularities or illegalities.

In Justice Njoki's assessment, President Uhuru Kenyatta was properly and validly elected as the President.

The Maraga four are criminals in robes for sure and they need to be removed. Njoki or Ojwang should be the new chief justice. Someone who understands and reasons with the law.

Only two judges Njoki & Ojwang seems to have wrapped their minds around the issues. Needless to say, the top two seemed way off. I think the scope, the intricate details and question of technology overwhelmed them. Like in any other trade, not wishing to acknowledge the disconnect, one of the safe exit routes is to cast aspersions and create doubt. Figuratively speaking, these two dissenting voices have rejected free tickets to a populist members club; and opted to stick it out for Wanjiku.

Justice njoki ndungu please put the pipe down. your rightful position is to descend as you did after the ruling of your supreme court, now you sound like you are in jubilee pocket and that is a lonely place to be at this point in time.

Can't believe that the majority opinion never bothered to review evidence stored in it's registry, but Njoki took her work seriously and reviewed the documents & found no evidence of missing stamps, blah blah...read her judgement which includes those docs if you are in doubt. Clearly this whole case is no not about jurisprudence, but civilian over throw...and for that reason I say kanuke...

operation maraga out has started.
He is a vompromised cj and cahoots with babu jathe...

They need to be remove these confused judges who could not pass muster in the U.S or U.K, and since we seem to copy this two countries alot the preferred countries by Raila, this court would have been disbanded in the west, they need to be have been removed yesterday, since they have failed the country.

Never got opportunity to read Ojwang report and I will but did fortunately listen to Njokis Ndungu's report. She really did take her work seriously, was thorough and very dedicated. How could the majority judges not take time to study the "problematic" forms? Do these judges communicate amongst themselves? Why didn't Njoki inform her collegues there was nothing wrong with the forms and if indeed she did, why didn't they listen? The country should not suffer because of some very tired looking lazy judges who don't want to take their work seriously. No wonder anything that goes through the Kenyan courts takes a gazillion years to be resolved esp land issues. There are very lazy judges out there who don't even take the time to continually educate themselves and evolve as the world is changing continually. And this is why the country is now suffering due to incompetence by SOME of them.

Wacha tuone Hii wakora wanne Kama walihongwa coz there is an ngo who took the videos,gps tracking,text to jsc.Am not that educated like this judges but having read that judgment it's pure idiotic foolish irresponsible one.How can a full sda maraga state that numbers don't matter.If uhuru wins n they do the same shit Wr ready to go back to the forest where our forefathers were planning to chase the wakora wazungu!!!

Since the Opposition is so fond of using words "According to NEW CONSTITUTION" it looks like this court has deliberately put the country on the VERGE of a CONTITUTION CRISIS just for the court to help their friend RAILA. KENYA IS AND IT'S ELECTORATE IS BIGGER AND BETTER THAN THIS THIEVES WE ARE CALLING JUSTICES. THEY NEED TO BE REMOVED NOW. BY FIRE BY FORCE ,we are tired of all sorts of INCOMPETENCE IN ALL LEVELS ESPECIALLY AS EXPENSIVE AS THESE ONCES. KENYAN PUBLIC WE NEED TO DO OUR THING AND TAKE OVER SEND THIS JUSTICES HOME ALL SEVEN OF THEM. THEY HAD PROMISED THE NEW CONSTITUTION WOULD WORK BETTER BUT THEY LIED, THEY FORGOT TO TELL EXCEPT IF THE CJ IS FRIEND OR FAMILY MEMBER. YOUNG MEN TAKE OVER.

This woman needs to pull her head out of the sand.If the presidential results were being announced without being verified what will of the people is she referring to.Do not pull numbers from your ass and then force it down our throats ati Jubilee had the numbers which numbers.The person who was busy fixing the numbers through a formula needs to be fired because he fixed and Jubilee still lost and up to now they insist they had and will have the numbers.Keep dreaming.