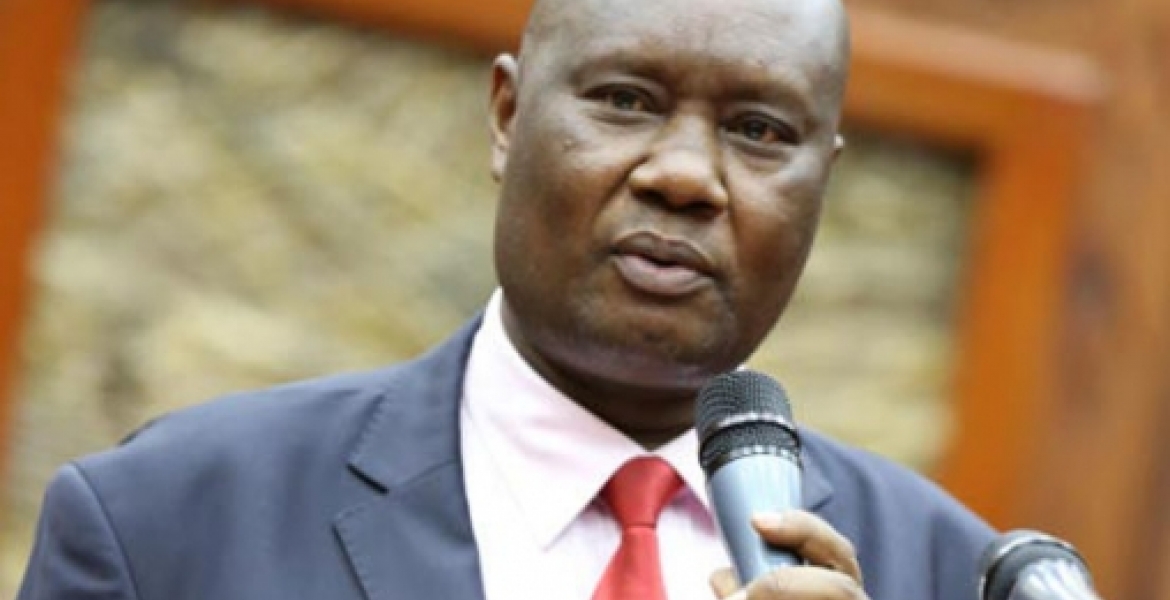 Speaking during his swearing in ceremony on Monday following his re-election, the ODM governor said the the unity of the country is at risk and called on the two to form a joint government. He asked Raila to Withdraw the presidential results petition at the Supreme Court and negotiate a coalition government with Uhuru.

"I call upon [Uhuru] and [Raila] to sit down and come with a united grand government instead of heading to the court because it will tear our nation further."

President Uhuru was declared the winner of August 8th elections, but Raila has filed a petition at the supreme court seeking nullification of President Uhuru's victory.

Ojaamong pledged to form an all inclusive government by including those who lost in the elections.

"I am forming an all-inclusive government with everyone. I will give them one-year renewable contracts to ensure they are on their toes and serve the people of Busia diligently and without favour," he stated.

"Busia will shine because we now have the chance to serve our people as elections are over . It's time to deliver what we all promised the electorate."

Thank you for being open. We knew all the NASA theatrics were focused on Nusu Mkate. If you win, you win and if you lose, you shut up and go home. Constitution of Kenya does not stipulate coalition government to accomodate losers. Losers need to wait till next elections. Period!

What is rubbish? Don't be a bully. Are you the transformed Iphone4-G?

Rubbish/Trash is another nama of GUEST 1

We do not reward losers. There is only one trophy for the winner in every competition

Right. As such Uhuru should NEVER have been Rewarded in 2013; and he should NOT be Rewarded for 2017.

Correct. I hope Ojaamong is listening.

From what I see, only one side is battling and we know which side it is. While in all other races (gubernatorial, MP's, Women and MCA), the losers have accepted the verdict as representative of the people's will, one perpetual loser has again decided not to concede. Same election, same electoral body…why are these not in question? Then he (Ojinga) goes on to try and use scorched earth tactics to declare himself the winner and corner everyone else (IEBC, Supreme Court, Jubilee) to agree with his delusional claim(s). Coalitions are for where there is no outright winner and in our case the 50% + 1 was well surpassed. Give us a break please.

NASA is behaving like a kid who wants to be honored for being last in a competition.
It's common in the US for kids to get a trophy for participating in a sport or any other event even though they lost or performed poorly.

That is encouraging mediocre. Those us kids should be taught that sometimes you lose and sometimes you win. Life is not that smooth.

Zactly!! Rewarding losers also produces self absorbed and irresponsible clowns like Raila. He was rewarded in 2008 with a PM post now in 2017 he wants the winners trophy.. the presidency!!

Hasn't Uhuru invited Raila to work with him in building Kenya,and creating peace,and prosperity?In fact if Raila has good ideas for Kenya, let him forward them to Jubilee

Raila has done nothing.He will b remembered as a useless leader who did nothing was anti development.He will b remembered of power hungry where he is responsible of 5000 killings in 1982 coup,07/08 1600 died n 600k displaced.Thats the history we know n we will always tell our kids about this idiot!!!Ojamoog can step dwn for his god raila.

There is only one winner. Uhuru won the election. There were hundreds of poll watchers from all over the world. They all agreed that the elections were fair not perfect. Coalition government?????????? Rubbish. You can not reward a child for acting up. It is over. All these gamesmanship in the high court is nothing but bad acting. Go home. People are ready to go to work.

What is so far extremely grave pertaining the election results that makes this governor to recommend a coalition government? There was no war during the voting, counting, and transmission of results. The only thing that happened was Raila/NASA refused to accept the results - as they had already declared before voting that the election would be free, fair, and credible only if NASA is declared the winner. So it was not surprising that they disputed the results. Several people died following Raila's call for mass action the night after the announcement of results when his supporters started blocking roads, burning tires on tarmac and damaging/looting property. Had they gone to court as they eventually did, nothing of the sought would have happened. The court process is underway. Why then the hurry to start calling for a coalition government? Is there already a plan to refuse the court's decision if it does not go NASA's way? Amazing!

Hakika poor pple remain foolish idiots u go on the streets throw stones on police with machetes,breaking shops n stealing am glad there were shot at coz the police have to protect the property's.U can demonstrate but peaceful u can hold yr play card but once u start throwing stones to police n breaking stores u right there get treated like a thug so to me it's good walichafuliwa kabisa.Who is mourning today is it the poor who lost lives or is it raila???Icc should come iin n take raila coz he is the one who called for mass actions which made this foolish poor idiots die.

I support a coalition govt ... Uhuru as president and Raila becomes the Aide de Camp