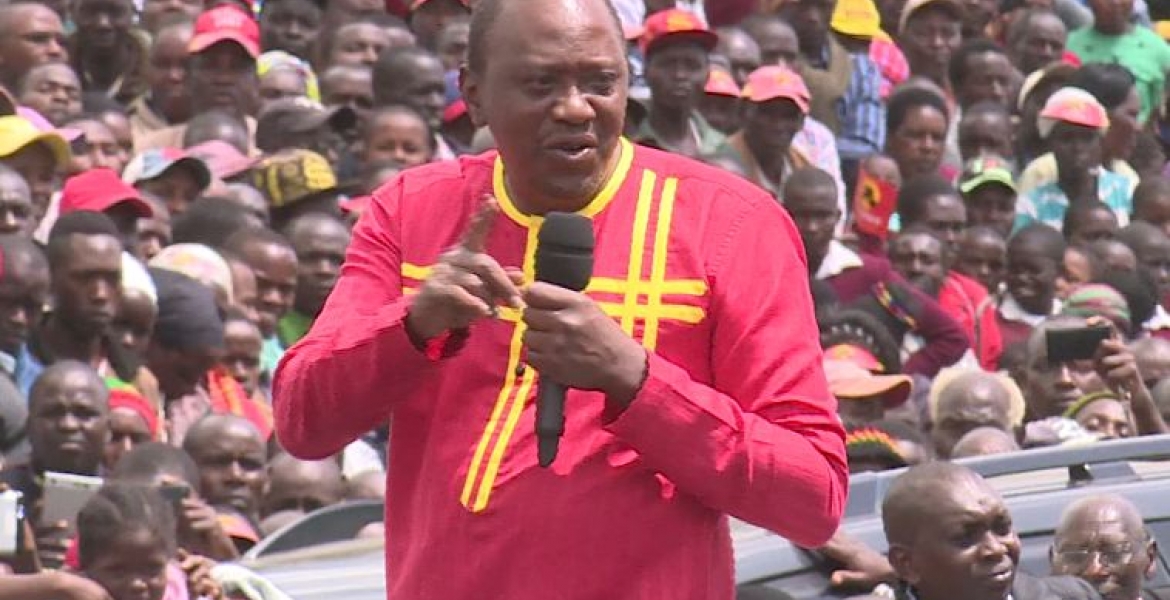 President Uhuru Kenyatta has revealed the reason why he snubbed the much televised presidential debate that was organized by the media on Monday evening.

The Head of State said attending the debate was waste of time as he could not debate with “someone who does not have an agenda for this country.”

Uhuru noted that he had “nothing to debate” with National Super Alliance (Nasa) presidential candidate Raila Odinga, his main rival in forthcoming elections.

"Do you want me to spend my time responding to Raila or commissioning projects? I decided that he will debate alone because I have nothing to debate with him. I will not waste my time there,” he said.

The President spoke during a campaign rally at Kiandu, in Nyeri County on Tuesday.

It is so important that kenya's voters are given the opportunity to hear candidates discuss and debate key issues prior to elections. It's NOT for the presidential candidates to decide. For the record, UK has given inconsistencies as he attempts to explain himself. First, he had demanded absolute control of the format, types of questions and debating rules from the moderators; today, he is blaming all on Rao. UK didn't want to answer questions re: NYS scandal, Ruto's corruption etc. Good for Rao, indeed 90 mins in the limelight.

One on one there would have been nothing new to debate. We have heard it all on the campaign trail. So, wisely I would have snubbed the debate also. Raila came out stupid debating himself. Mad people debate selves.

Sokora. Your Selective Listening (that belongs to fools) did NOT listen to what RAILA said. And tell Your Drug Addict Kiguoya to Bring His Agenda next time.

Meanwhile:
We know Your Kiguoya's HIDDEN Aenda is to Launch:

UK made a major colossal blunder that will cost him votes. UK has been negatively influenced by his DP; more of dictatorship and self entitlement. He owed Kenyans his presidential record and the future for the country if re-elected. He can't deal with pressure that comes with the job, he has had it easy all his life.

The Kenyans voters made a very serious mistake in 2013 when they thought that by electing young leaders, Kenya will succeed in getting man job opportunities for the youth, there will be national security, and corruption will finally be a thing od the past!

Fast Forward - 2017: Unemployment is over 40%, insecurity is the worst since independence, corruption has been institutionalized so much that from 2013 to 2017, the amount of money looted supersedes all the corruption from 1963 to 2013!

Solution: It is not how old you are when you become the leader of your country, but what people you associated with during your formative years. Uhuru and Ruto were politically groomed by the second president of the country who was very corrupt individual and a first class dictator.

Uhuru, why are you devoting your energies in creating more divisions in the country. Was it necessary to create tow more ethnic groups during your administration?

It is time that we focus on our similarities, but not our differences. Are you going to make another division by making all women and men ethnic group number 45 and 46?

As long as you a naturalized Kenyan or a Kenyan by birth, you are a Kenyan.

Does Uhuru read Mwakilishi, I see him being addressed here directly but between twitter , facebook, campaign trail etc, I wonder if he is reading this :-)

I wish to thank Millions of Kenyans who are supporting the re- election of the Development based, harmonizing Jubilee Team. I regret that the divisive, Violent, and hateful NASA agenda is best exemplified here on this forum.Hekima, Guest 1,and others who cannot use the power of reason; are hauling insults just like their leader..
I wish to remind Kenyans that A dog on sale in the market attracts a bigger crowed than that of a goat in the same market. SURPRISINGLY more people will opt to go home with the Goat than the Dog.
Come 8/8/201, Kitandawili and his theatrics will be allowed room to go back to what they know best, throwing stones and demonstrating for another five years. Serous Kenyans will re-elect Uhuruto to another 5 great years of development and peaceful co-existence.

JKorig. You and Sokora are same thing: Selective Listening and Head in the Sand.

What a load of bullshit from Uhuru. If his development record can speak for itself, why the hell is he wasting our tax money doing rallies all over the map? Uhuru failed to show up because he had nothing to show after his five years of failure. He could not defend the mega corruption in his government. Hey Kenyans answer me this: Which politician on earth would turn down such an opportunity to show case his/her superb development record? Uhuru doesn't deserve even one extra day in the state house. He has failed and my fellow Kikuyus can take this to the bank!!!!

only a mad man would refuse to apologize for the divisive comments that were made in Kajiado.Rao said he meant every word that he said in Kajiado.This guy dangerous.I don't care what people say about him.Ask those people who don't have loved ones living any more, because of this man's divisive political history.Then you will understand why he will lose the upcoming election. UHURU has been working hard to maintain the peace in the country.This is why He is going to get the necessary votes to win the election.

KIMani. Rao meant Every Word he said. And I agree with him because he was Cautioning those who were Pontetial Manipuletees (by manipulators).

Also Rao talked about rent controls.This type of antibusiness approach is not good for Kenya.It is likely to reduce incentives for land lords to provide housing to tenants.Also this would also send a message to tenants that they do not need to pay rent.This is likely to ferment problems in communities.The problem with RAO is that the more he talks the more people realize that he is not good for the country.In Kajiado he was clearly saying that "watu wanakuja kuvamia,kuvamia mpaka sasa hakuna mashamba."..."kule wanatoka wanatoka sababu gani wanakuja kwako...si wabaki kule kwao" ........This in Kenyan politics is very very dangerous hate speech.Yet Rao does not even have the decency to apologize.Instead he says he meant every word.This man is not the right leader for the country.Vote for UHURU.Vote for Jubilee.

I don't know how old you are but I can guess from your myopic knowledge and lack of facts about the history of Kenyan, you are probably between the ages of 18 and 22. I cannot allow you to get away with ignorance.

Had it not been for our heroes of the Second liberation of Kenya (Anyona, Matiba, Rubia, Shikuku, Muliro, Koigi wa Mwere, Raila, Orengo, and many more others) your friend Toroitich Arap Moi would still be the president of Kenya. At the moment, Kenya would be worse off than Somalia or Haiti.

Your two friends Uhuru and Ruto are nothing but opportunists. As our heroes of our second liberation were being tortured in Nyayo House and of course many were killed, your two friends were busy praising dictator Toroitich Arap Moi as the best president in Africa! They did not deserve to be elected in 2013 as the leaders of Kenya!

Do you know the 93 year old leader of Zimbabwe (who has been in power since April 18, 1980) Comrade Mugabe? Your idol Toroitich would still be the president of Kenya like him!

I will not let you get away with ignorance! The informed and enlightened people of Kenya should not allow Toroitich's sycophants (Uhuru and Ruto) spend an extra day in our state house come August 8, 2017!

MOTTO: Anybody else in power come August 8, 2017 except Ruto and Uhuru! Please educate your misinformed supporters of Uhuru and Ruto to vote wisely next month.

Age does not always come with wisdom and you have no monopoly for moral high-ground to educate others. Your berating of the 'younger' @jkorig does not respond to his on-point criticism of Raila and NASA - divisive, violent and hateful agenda. Uhuru Ruto are not angels, but they are less repulsive than your Raila. You are welcome to vote for him if you admire his values, words, and deeds but other people do not have to vote for him to prove they are not tribal.