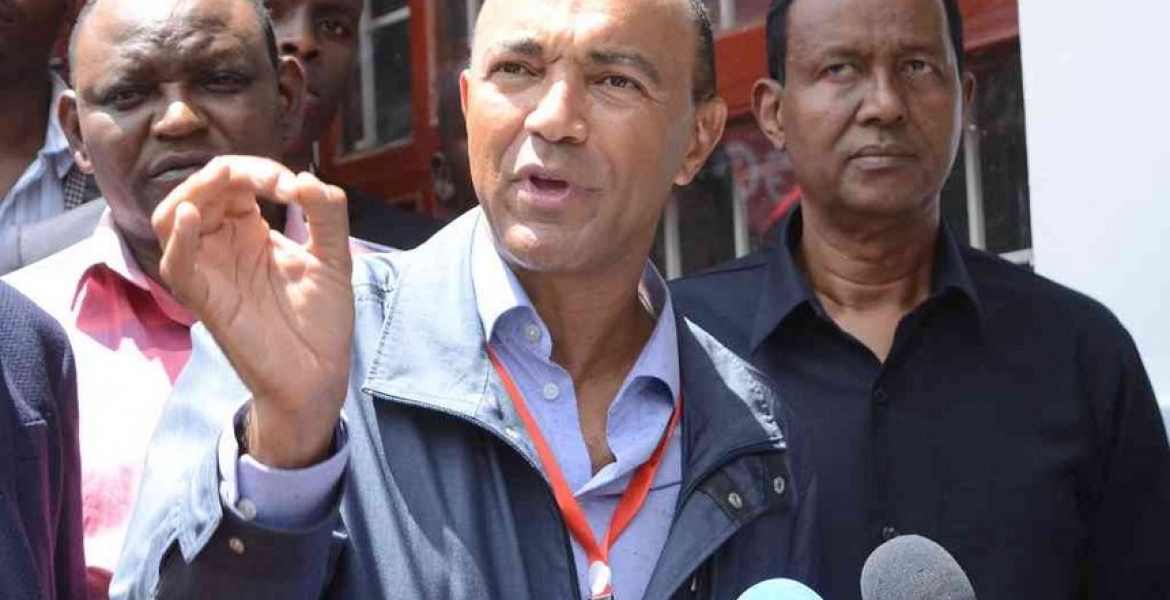 Days after President Uhuru Kenyatta asked him to step down for Mike Sonko in Nairobi governor race, Peter Kenneth has maintained he is the best for the seat, terming incumbent Evans Kidero is a "consistent loser" and Mike Sonko an "unmitigated disaster".

"It is time to abandon your bid and support the winning team of Sonko-Igathe," the President said during a rally in Nairobi on Friday.

Kenneth seems to have given the President's plea a deaf ear, and instead says that Sonko is a failed Senator and "cannot wash his hands off the mess" he has made. "I have walked all through and seen the troubles Nairobians are facing. It is evident that even Sonko cannot be a solution to these problems," he said.

Kenneth lost to Sonko in the race for Jubilee Party ticket in April primaries after garnering 62,504 votes against Sonko's 138,185.

Speaking during a campaign rally in Karen, Kenneth said he has no problem with Uhuru supporting Jubilee candidates. "As the party leader, he is allowed to carry his candidates around...but then governorship is not about party prestige...it is about service delivery to the people," the independent candidate said.

PK needs to get out, no chance of winning so he plays spoiler. Useless

UK is from Kiambu; PK from Murang'a. None of the 2 Regions should try to CONTROL the other.

Ofcourse ni haki yake kuwa kwa debe but remember he was at it then the voters rejected him during nominations so u think its hippos who will vote on 8th???Its the same pple who rejected him n they will do it again coz even the few he got knows he is there to spoil Sonkos votes??This is how educated pple becomes stupid n idiots they cannot man up drop their pride n support each other.Trust me PK beta pray that sonko looses to kidero juu if sonko wins knowing very well that PK was spoiling for him not to win,he is completely done politically n personally as kiambu pple we will make sure he is done!He made a mistake 2013 not supporting Uhuru who gikuyus had chosen to represent them n he thinks 2022 we will support him after spoiling jubilee votes in Nairobi??Watch this space.Remember tribal politics is a reality?After trying thug phd educated kidero who did nothing let's try sonko/igathe for Nairobi.

Point of correction Mkenya Halisi......yeah, it's hippos which gona be going to the ballot 8/8/17 to elect another tribal outfit of looters for the next 5 years. Ever asked yourself why Sub-Saharan

Point of correction Mkenya Halisi.....yeah, it's hippos which gona be trooping to the ballot centers come 8/8/17 to elect a tribal outfit that will be looting the country once more in the next 5 years. Like a dog that's being incited to go attack (shhhhhh......ka, shhhhhh.....ka), Kenyans have once again smoked their thing and cannot reason beyond their noses. They'll be electing charlatans and con men to critical positions of authority and then they'll turn around and say the country is not headed in the right direction....idiots!

Mlachake I will agree with you 40%.This happens all over the world pple elect leaders using their makamasi??Usa just did it n france??They elected mr BO who invanded n killed innocent women n kids in Syrians,Libya,Afghanistan n the previous bush gover too did the same in Iraq.If not corruption Its killings!Am not justifying our leaders but they r not that evil than where u resides??Atleast kwetu kiambu/ especially kikuyu constituency we have seen a lot of progress no wonder our mp is not fighting with anybody.He is the only mp who have already won juu ako kwa debe peke yake.Actually he should b given the ticket right away instead of iebc wasting money there juu ako peke yake?Mlachake in 15/20 years Kenya will b a very good great rich country???Maendeleo iko nawenye macho wanaona unless they r completely blind.