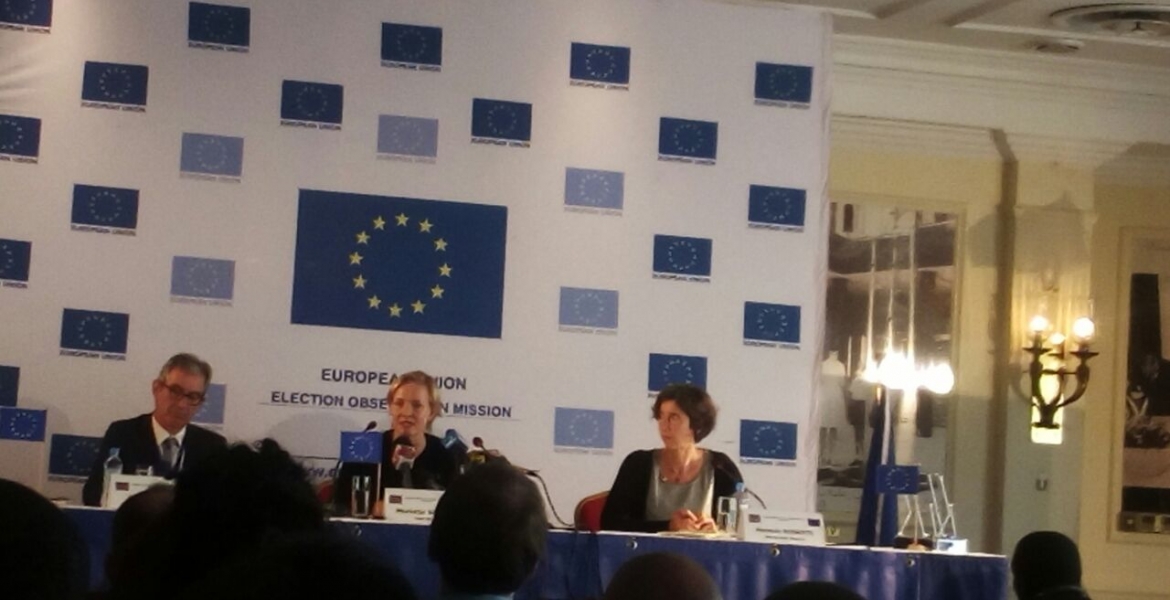 The European Union Election Observation Mission to Kenya (EU EOM) has expressed fears of possible election violence, during and after the August 8 elections.

The EU EOM Chief Observer Marietje Schaake while addressing a press conference on Monday said that the observers had established that Kenyans from different parts of the country feared possible violence, urging the government to prepare by putting up necessary mechanisms to save Kenya from violence.

This comes just a day after President Uhuru Kenyatta made an assurance to the EU observers and the international community that Kenya was well prepared for a free, fair, credible and peaceful election.

“Elections will be held on August 8 as required by the Constitution and the Government has taken steps to ensure Kenyans exercise their democratic right and choose their leaders without interference. We have also taken measures to ensure that the polls will reflect the will of the people as well as ensuring that the country will be safe during and after the exercise,” said President Kenyatta.

EU, however, expressed confidence with the preparations that have so far been made to ensure a free, fair and all inclusive poll.

“EOM will be assessing the General Election according to Kenya’s national law and the international commitments it has made regarding elections. We will look at the reality across the country and make recommendations on how to improve the democratic process in the future,” said EOM Chief Observer Marietje Schaake.

The EU observer mission has already deployed 30 observers in different parts of the country to keenly monitor the preparedness of various bodies and all aspects of the electoral process, including campaigns by all contestants.

I am challenging my fellow Africans in social sciences and humanities to get together and develop a political system that is better than the current "democratic model " originally from European and spread by Europeans in diaspora ( Canada, USA, Mexico, Central and South America, Australia, and New Zealand ).

Democracy in Europe produced Adolph Hitler. We have Donald Trump another by product of the "democratic" model in the USA. The world needs a new political model that can make it impossible for people who are not fit for the highest office in the land to be elected.

Kenyans should vote for UHURUTO. The core of Jubilee Politics is all about continually improving the quality of peace politics in the nation.That and also bring about development to all Kenyans.Jubilee's Political work is to see the quality of Peace Politics all over the country improve,whether it is in the coast,in the northeastern region,among the Masai, the Kalenjins,the Kikuyus,the Luhyas,the Luos,the Somalis.We all need more love,compassion,Peace and Civil Order in the country.Kenyans should avoid voting for Raila. He has been known to lead Kenyans towards chaos.Plus his leftist tendencies and upbringing would only lead the country towards higher levels of Poverty. No wonder the people of Kibera and others that Raila has lead for many years have nothing to show in terms of development, for the time that he has led them.Rather what the public recalls is the chaos that he has been known to cause.While always denying personal responsibility for the chaos......Vote for Peace.Vote for Development.Vote for Jubilee.Vote for UHURUTO.

I would like to hear candidates talk of accepting defeat gracefully.We all want to live in a peacefully and prosperous Kenya.In any contest, there are winners and losers.If Uhuruto convinces the masses that they are the real "mcCoy" so be it,and same goes to Raila,or any other presidential candidate.There is no reason what so ever for ,especially the youth to engage in violence,because their candidate lost.It is also unfortunate that it is some of our leaders who incite masses to violence.This is totally uncalled for.We have seen results of violence after elections and we all agree that this should not happen again.

Kenya Elections
Todays election have moved Kenyan to higher level of Democracy in election.
The leaders are little bit behind because of greedy of money.
If the leaders could go by losers to support the winners, the tension could not be seen high.
The tension will only be high on top players of two Raila and uhuru. If Raila wins,life would be as usual he will easily form the government but if Uhuru wins Raila will go to street with stones to fight government with weapons this is where the problem is.
What we need to do is to talk to as many kenyans as posible to ignore the losers you vote go home this way we will be able to control and the loser will go home piece