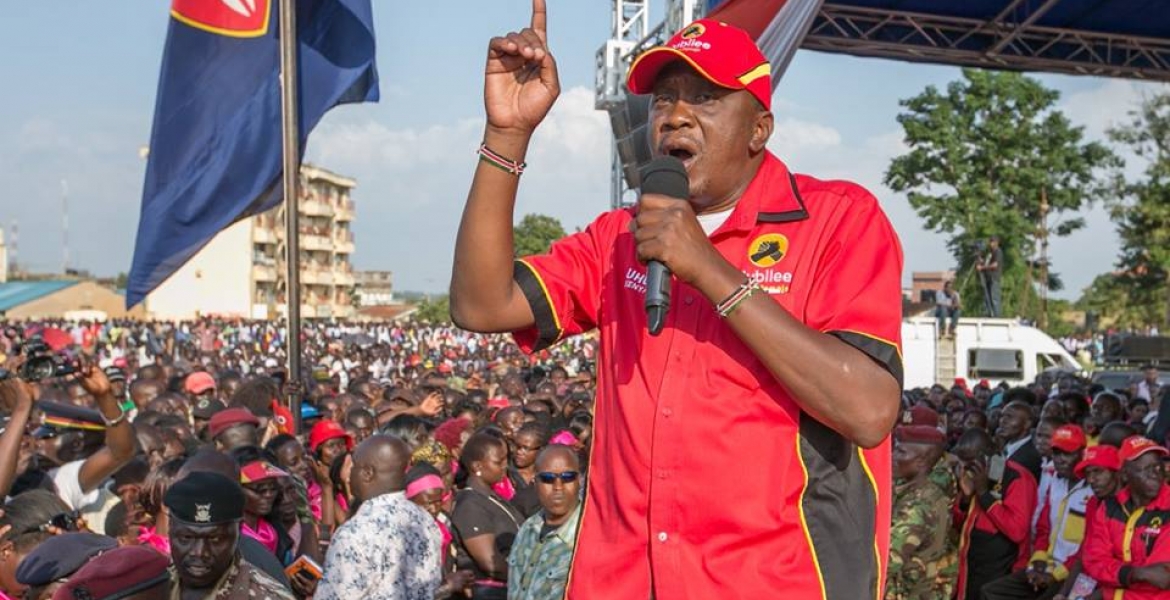 President Uhuru Kenyatta has exuded confidence that he will win the August 8 elections in a landslide, adding that his main rival in the National Super Alliance stand no chance against him.

"In 2013, we defeated Raila and his team, who were in Government. Today, we are the Government. They should be ready for another defeat. We are sending them into permanent retirement from politics," said Uhuru, adding it would be a landslide win.

The head of state was speaking in his tour of Busia County on Wednesday, a region widely perceived to be an Opposition stronghold.

Uhuru called on the Opposition to give the Independent Electoral and Boundaries Commission (IEBC) room to deliver the August elections, saying that they should stop the wars with the poll body and face the electorate for votes.

This president’s sentiments come at a time when NASA brigade raised concerns over the awarding of ballot printing tender to a Dubai firm, Al Ghurair, which it alleges has links with President Uhuru’s family.

"I tell my brother Raila to stop excuses and sell his agenda. Leave the IEBC to do its work, because, the commission doesn't have votes. Jubilee does not need to interfere with IEBC to win." Uhuru added.

The President challenged Busia and the Luhya community to start identifying new leaders, adding that NASA co-principals Musalia Mudavadi and Moses Wetang'ula will rot in political oblivion after the August polls.

I am personally making an appeal to those people who are still NASA supporters.To realize that the NASA Leadership is not serious about Peace and Stability in the country.This recent accusations of the IEBC, while we are so close to the election is a clear indication of this.I ask even NASA Supporters. Those that are looking at this situation and are clearly seeing that the NASA leaders are just trying to misdirect the country.I ask those NASA Supporters to consider voting for Jubilee.We can all contribute to the Peace and Stability of the country by doing our part.Let more and more Kenyans decide to vote for Jubilee.This is a patriotic duty at this point,in my humble opinion.

The two billionaires ( Raila and Uhuru) are not fit to be the next president of Kenya! Both are arrogant and extremely self centered people. The corruption under Uhuru is unbelievable. He personally admitted that he doesn't know what to do to curb it.

The nepotism under Uhuru is again unbelievable. When I read the names of people heading various departments I wonder whether Kenya is made up of only the Gikuyu micro-nation! Uhuru's sister was recently involved in some financial scandal the ministry of health! Majority of the people of Kenya have a 15 seconds memory like the one possessed with a wart hog. How can they think of re-electing Uhuru after such an " F " grade performance as a president during the last four years?

Raila did the same thing. When he was a prime minister, he appointed a close family relative as an ambassador of Kenya in the USA. His immediate sister had a senior government position in the city of Los Angeles in California.

Choosing Raila or Uhuru as the president of Kenya is similar to offering a lifetime vegetarian lunch and asking whether they would like to eat lamb or steak!

In Kenya we need a no nonsense president like Ndugu Magufuli of Tanzania.
Long live the Republic of Kenya without Raila or Uhuru as the next president of Kenya.