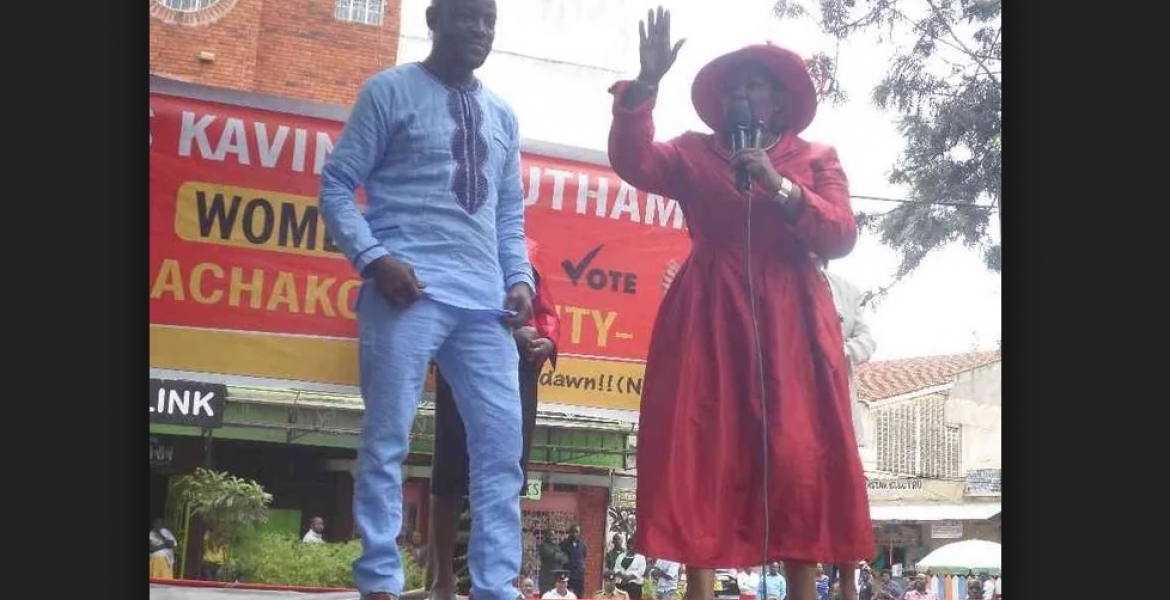 Machakos County Women Representative contestant Agnes Kavindu has publicly come in defense of her marriage to Machakos Senator Johnson Muthama, claiming that she is still the senator’s wife.

Speaking during a campaign rally at Mulu Mutisya grounds in Machakos, Kavindu paraded her son, Moses Muthama before the crowd, saying it was enough proof they are still together.

“I know you have heard some gossip in the media but I ask you...Who does this gentleman here resemble?" she asked and the crowd roared 'Muthama'. "That should tell you I am still his wife."

Muthama had earlier disowned Kavindi as his wife, saying that they had divorced in 1983 and accused her of trying to use his name to gain political mileage.

But Kavindu, who is contesting for the seat on a Jubilee party ticket, asked Machakos residents to ignore the "petty discussions", as she is determined to deliver as their Women Representative. “I have very good plans for youths addicted to drugs and Miraa. We will fund them so they can engage in income-generating activities," she said.

She added that she will ensure women get funds for table banking and money-making activities such as poultry farming if elected.

She called on residents to abandon party politics and vote for individuals based on their agenda for the people.

That man/child/son you are parading could have resulted from a one night stand. Having a child with a man means nothing. Why do women think that children save marriages. Mzee wako alikukataa hata kama mlilala pamoja na ukashika mimba..

If the supposedly spouse of mine denounced me in public,that would be the end of it. Besides that, by the time it reaches the public denounce, I would have known where I stand...
I would be ashamed to insists being married to a person who does not want me,or the marriage.I wonder if the name recognition is what she is after...which is a good move by the way.