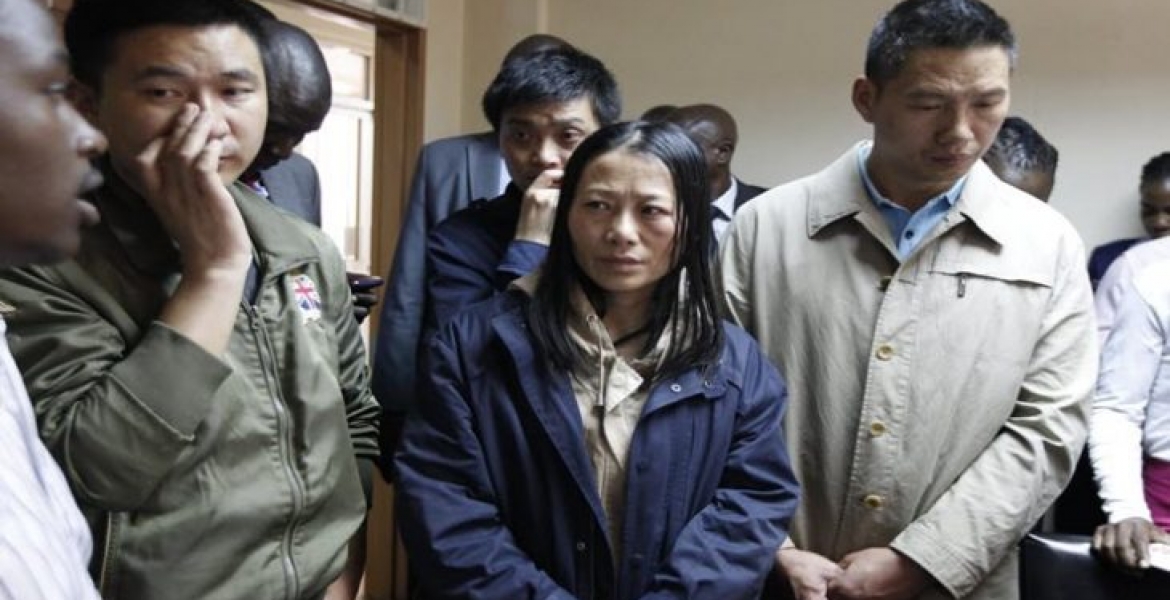 Four Chinese nationals who were arrested on February 9th for allegedly caning Kenyan workers at a Nairobi restaurant have asked the court to deport them.

The four; Deng Hailan, Chang Yueping, Ou Qiang and Yu Ling made the application when they appeared before High Court Justice Luka Kimaru on Tuesday.

The foreigners told the court that they were willing to be deported back to their country because they are suffering but the DCI opposed their application, terming it an abuse of the court process and an attempt to defeat justice. The DCI asked the court to dismiss the application and allow the case to continue.

On February 13th, Principal Magistrate Hellen Okwany allowed police to detain the four for 15 days for investigations to be completed. Hours later, Interior Cabinet Secretary Fred Matiang’i signed a deportation order for the four but the order was suspended by Justice Kimaru on February 19th after the suspects challenged the removal.

The four were arrested after detectives from the Directorate of Criminal Investigations (DCI) raided Chez Wou Restaurant in Kileleshwa, Nairobi on February 9th.

The raid came hours after a video clip showing Hailan, a chef at the restaurant, canning a Kenyan waiter went viral on social media. After the arrest, it was discovered that Hailan did not have a valid work permit.

Yueping and Qiang, who are both chefs at the restaurant, were holding expired visas while Yu Ling, a cashier, was holding a visitor’s visa but without a work permit, according to the DCI.

They are all facing charges of assault and causing actual bodily harm.

Keep them in Kenya until their cases are determined. Their actions were lawless and they must pay the price. Also, those canned should sue them in a civil court for damages.

Matiangi is a sellout. Why is he deporting them before justice is meted out? Which other country in the world does that? He needs to be exposed. Kenyans no what happened here.

On Feb 13th Mating'i ordered them removed but they were not willing to go to their Coronavirus infested country so they got their wish to stay on the 19th Feb. Barely a week later, they are eager to leave afadhali hata wapate coronavirus. Why the sudden change🤔.

You know those guys have been converted to wives in remand.

Let them enjoy the Kenyan hospitality in remand.They were busy being inhospitable now the wheels have turned.The guy who was doing the whipping needs to be whipped only then will justice be seen to have been served.

Yaani hata hawa wamejua they can call the shots.....oh we don't want to be deported...oh now we want to be deported....as if we do not have laws in this country. Why can't our own choose...or maybe they do...the smallass whiny Baby 'owiny' did.....What a shame on our judiciary....they should surrender and declare themselves UNABLE to deliver JUSTICE!