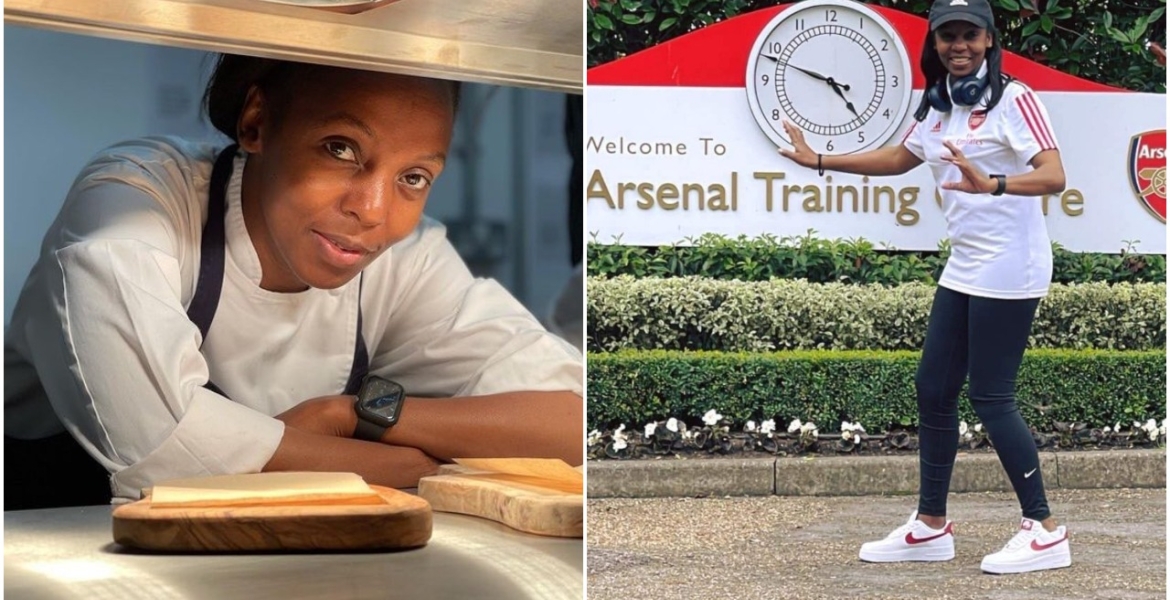 Bernice Kariuki, a Kenyan-born chef based in the UK is living her dreams after landing a job at Arsenal Football Club.

Bernice, who was born and raised in Jericho within Nairobi’s Eastlands area, joined the north London-based club as the first-team private chef earlier this year. She is part of a team that is responsible for the giant English Premier League side’s first-team menus.

"A girl from the ghetto Jericho living nothing but her dreams. May I reintroduce myself as Arsenal's first-team private chef," an elated Bernice said following her appointment.

Working under Arsenal’s Executive Chef Darren Taylor, Bernice prepares meals for first-team players, manager Mikel Arteta, and members of the technical bench. She is also tasked with managing the nutrition needs of the team before and after matches, as well as menus for the traveling team.

Bernice, who studied culinary arts at Westminster Kingsway College in London, has previously worked at top hotels in Britain among them The Lanesborough, The Dorchester, and The Waldorf Hilton in London.

Arsenal is one of the most successful football clubs in England and Europe with 13 league titles and 14 FA cups.

Kenya’s High Commissioner to the UK Manoah Esipisu recently recognized Bernice’s achievements, hailing her as a trailblazer. The two met recently in Windsor, Berkshire at a forum for Kenyans living in the UK.

"Delighted to bump into Arsenal first-team chef Bernice Kariuki at a black-tie Kenya UK Diaspora event in Windsor, Berkshire. Trailblazing and embodying the Kenyan 'can do' spirit. Congratulations," Esipisu wrote on Twitter.

What is magical about being a chef Kazi ya mikono.Trailblazer my foot

HATE people who reason like you men! Do you have to be negative always? Wacha Madharau na wivu weee nugu!

Every job is important! Mark you her salary is in the scale of the US’ neurosurgeon! Being a chef is an a science & an art! You can’t properly do what she does!

Respect other people’s choices & careers! Never steal anyone’s tinder by being negative if you can’t have something nice to say!

Black people got problems deep within them! Why feel some unnecessary pain over this lady’s accomplishments!? She is not stealing like you fool!

Sadly I can tell you are as black as your mama’s pot bottom!

Weren't you taught was a kid that if you have nothing nice to say , shut your mouth!

Congratulations my dear sister be blessed

The amount of stress from friends and kinfolks in Kenya she will now experience will be off the roof. "Tuma pesa mtoi wangu yuko Mbagathi ni msick, tutumie school fees Njoroge amefukuzwa shule". I would not like to showcase my success kwa wale niliacha home.

Maybe it’s necessary to let the family know so they can also learn to work harder!

You don’t have to give anything every time anyone ask for it! People need to depend on themselves not what others are earning!

This habit of always receiving is very bad! Mostly free money is normally wasted anyway; because those who receive it never worked hard for it! The receptiveness tend to use the green money for unintended purposes!

So if she cooked ugali for Gor Mahia would it be news.
Seriously Mwakilishi stop feeding us with Garbage

No. It wouldn't be news. Gor Mahia is a wannabe football club whose fans are known for throwing stones ...just like their baba, they cannot handle a lose without throwing tantrums. Who'd even want to be known as their ugali cook???...hawaja fika class ya kua na chef bado.

Hahaha@ Just me, I would be surprised if Gormahia grazed the Telegram,or the Daily Mail in UK.Contrast that to how Kenya football is rife with English premier league news.But to be fair their have been some hooligans in English league as well...But your point is well taken.Gormahia might not even beat Arsenal if the match were 11 Gor players vs 8 Arsenal players.