Raila Addresses Kenyans Living in the US 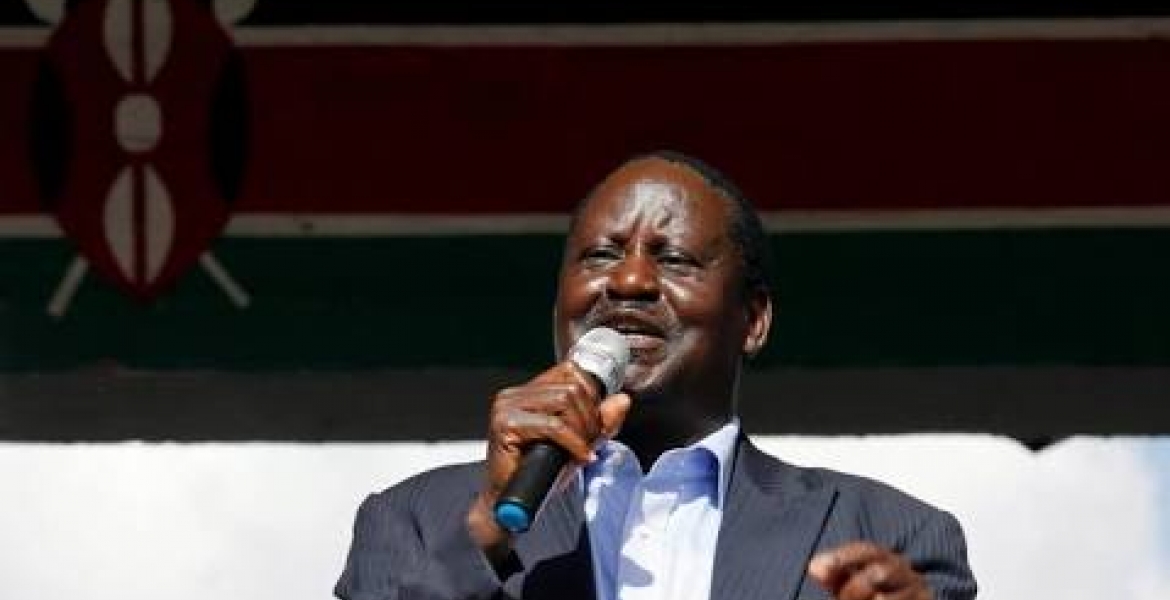 Opposition leader Raila Odinga wants the 2005 Bomas draft of the Constitution be one of the issues on the table once talks to end the current political crisis in the country commence.

Speaking while addressing Kenyans living in United States in Washington DC, the National Super Alliance (Nasa) leader said the draft was the solution to current problems facing Kenya, but it was disregarded by the then administration.

"The original Bomas draft of the Constitution had a hybrid system of government, where we had a prime minister and the President," Raila said.

Raila argued that current system of governance favors large communities and perpetuates exclusion. The former Prime Minister also said that electoral malpractices is not the biggest challenge in Kenya, but the problem is much deeper than the push for electoral reforms.

"People tend to forget that the real issue facing Kenya is bigger than rigged elections. It is how we want to live. We are being ruled without having a say."

Bomas draft proposed the position of premier, who was to be appointed by the President and was to be the head of the Cabinet. It also suggest two deputy Prime Ministers, a maximum of 20 and minimum of 15 ministers.

The Orange Democratic Movement (ODM) leader further said that Kenyans want to see the value of the huge taxes they pay to the government and promised to resist oppression from President Uhuru's administration.

"Monies are borrowed, misappropriated and you are forced to repay with a loan. There are so many things wrong with project Kenya."

He added: "We have a regime that has become rogue. But we are not going to give up. We will ensure that no Kenyan is oppressed by this regime."

How do a few positions - prime minister and his two deputies - give Kenyans a say in how they are ruled? How does adding three top jobs to an already top-heavy executive structure make Kenya more inclusive? Raila's brain fog seems to have infected even experts because I don't hear anybody ask these valid questions.

You have my support ODI.

Raila meets criteria for psychiatric inpatient admission under DSM IV. We have to give the constitution a chance to learn from what’s working and not working. One things that’s not working Is You Raila. Your call for sabotage, demonstrations and frustration and greed for power just need to be extinguished. You bring no ideas to the table and alternatives. You are alone sir. I recommend your retirement and groom young leaders like Aukot who can take over your now dead beat ODM, guerilla NRM, # resist movement, boycott or teargas party or whatever you will come up with.. Raila you stand a waste of time to all Kenyans and would appreciate your departure from media embarrassment..

Yes. Kenya has many problems. You, baba being the biggest one. Retire already, so we can find someone with less baggage to lead the next generation. Tumechoka na sarakasi na vitendawili. Roundi hii hakuna cha kupewa mji!!! Divisive mofo!!

I think only wafuasi got the memo, I'm wondering where that was too out of curiosity not that I would have attended :-)

I guess it was in Hyattsville, Md if I'm not wrong

Kwani Wanjohi(son of alcoholic brew) amekunyua Makufuli(Pombe).Your headline is misleading.I was in Washington yesterday(even now) but was never addressed by muchawi Raila.Secondly,demon Raila is not my spokesman to say Kenyans want this and that.Maybe muuaji Raila can speak for the dead.

WHICH KENYANS YOU TALKED TO IN THE UNITED STATES???? WE ARE JUST TIRED OF ALL THIS DRAMA. ITS ONE YEAR NOW GONE BY OF THESE NASTY POLITICS. KENYANS HAVE A LIFE TO LIVE & THINGS TO DO THAT MATTERS.

I said yesterday they need to take fake Joshua to St. Elizabeth Hospital in DC because he is mentally unstable. Do not let this manoki back in Kenya to cause trouble

Elections and petitions will bankrupt Kenya because being a politician is the only lucrative job. Presidential Election 45Billion repeat of election 15B...by election each County filed 200million roughly 3B.....over 65Billion spend on election 🙆🏻‍♂🙆🏻‍♂🙆🏻‍♂🙆🏻‍♂🙆🏻‍♂🙆🏻‍♂ remember mutula kilonzo..senator Makueni by election cost was 230million. Rwanda 2017 presidential cost 5.5B (population 13m people )
As for now 337 petitions filed.....490B (borrowed within 3months) --- life will be extremely expensive. Vote uhuruto...out and ask yourself. ..if one ballot paper cost ksh 20 shillings. Does it mean IEBC uses gold ballot boxes or what? It don't add up UHURUTO ARE PUPPETS THAT SHOULD EJECTED

The cry baby and lord of poverty at it again.Crying wolf and vomiting poverty and incitement.
Honestly,this fake Joshua is the most useless human being on the face of planet earth.
What can he do now that he failed to do when he was in the nusu mkate government.He is greedy for power and selfish.

Surely, Raila and his supporters should be ashamed of themselves. Lie after lie after Lie. Raila will address the Congress, of course it could NEVER happen, and didn't happen. Raila held high level meetings in the USA, with senior State and Congressional officials, No he met one staff and some “Jake come late” post administration begets; who have no substance in current US administration.
Raila's Visit to UK is paying dividends, UHURU will go home soon. Oh no Raila begets in UK fund raise a pittance 134,000 between themselves. NOT Government.
Raila met and addressed KENYANS in USA, lie. He met secretly with just a few begets, because majority of Kenyans in the diaspora are sick and tired of his retrogressive politics of distraction.
Raila has finally locked himself in the cage, First he boycotts election assuming they will not go on. Constitution said they must go on and they did. He transforms NASA in to a resistant movement which then denies him any constitutional legal recognition. Then he calls for the removal of all Western Country Ambassadors because they are “corrupt” He is on his own and headed to The Hague.

how can you Raila join a system you say is a rogue system. Opposition have shadow minsters etc but no shadow President or the position you want to hold . campaign for being allowed back to parliament as an MP if your party nominate you and stop annoying struggling Kenyans. we need to do our jobs so that we can have bread and butter at the end of the day. It is difficult to ignore what is happening around us . it is destructive