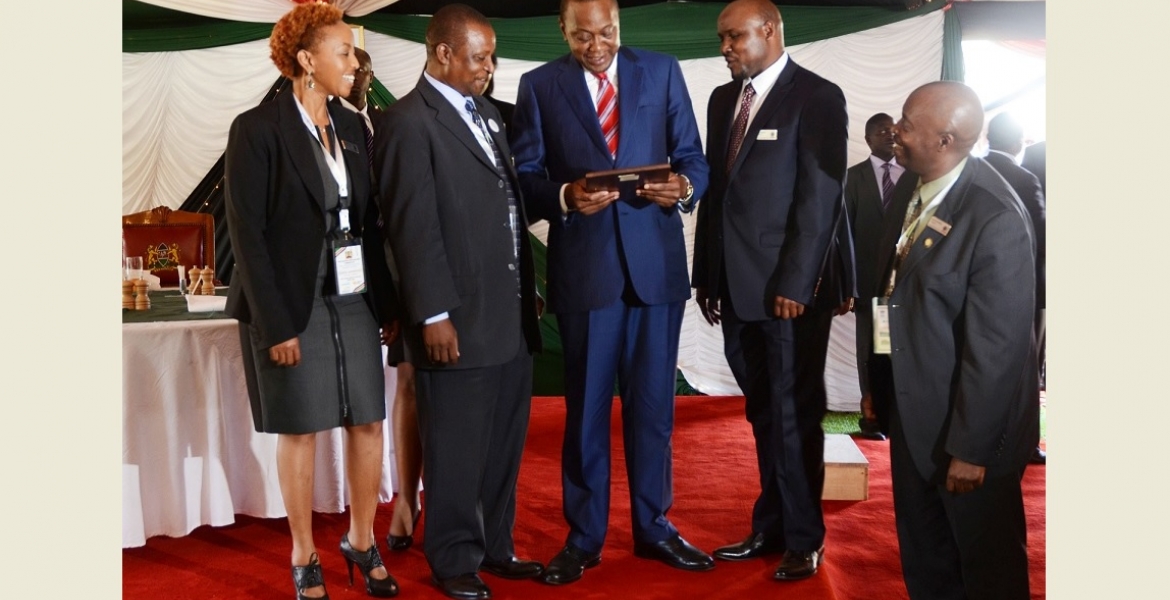 The Kenyan diaspora has significantly come of age and has steadily ingrained itself deeply in all activities undertaken within and without its national borders, not only economically through investments and remittances, but also in political and corporate activities. Kenyans have steadily continued to occupy seats of power in their respective host countries while others have trooped back to Kenya to take part in the different levels of the legislature on offer in the upcoming general elections as well as in other public and private opportunities.

Not to be left behind are the many diaspora-led financial institutions that the Government of Kenya has continued to register in all continents where the Kenyan diaspora resides. Of particular note and worthy of mention are the SACCOs currently registered for Kenyans in the USA where interested Kenyan investors are taking part in serious development activities that are directly benefitting the Kenyan Economy in profound ways.

According to Mr. Washington Oloo, Director, Diaspora and Consular Affairs Directorate in the Ministry of foreign affairs, the Government of Kenya has over the years recognized the importance of the contribution of the Kenyan diaspora to the economy and development in general. Kenya’s economic blueprint “Vision 2030” considers Diaspora remittances as one of the flag ships under the financial sector. Remittances, whether invested, deposited or donated by Kenyans abroad are an important source of foreign currency inflows into the Kenyan economy.

It is in this light that the Kenyan Diaspora should takes seriously the investment opportunities created for them and be a part of these institutions made available by the Government and other community social associations. Participation is not only important, but also ensures that these institutions have the very important qualified human resource capital needed to improve the product provision scope while using fine management skills that are needed to ensure even the lowest within our midst benefits immensely from our hard earned resources.

As a contributor to the discussion on the Kenyan Diaspora investments in various forums in Government and beyond, I am humbled to see the keen interest the government has placed in mapping out where most of us are, and who we are. As per the United Nations'  Department of Economic and Social Affairs, Kenyans are spread out across the globe and are diverse, multifaceted, multi-generational and span the entire socio-economic spectrum, comprising of professionals, entrepreneurs, domestic workers, students, athletes et al.

In a forum organized for stakeholders by the Ministry of Foreign affairs /Dept. of Diaspora Affairs in 2016 and published in the Kenyan Business daily, the Vice Chairman of the Kenya USA diaspora SACCO Mr. Simon Nyagah highlighted the milestones the SACCO has achieved in actualizing the investment goals of its members. It is in this context that we, the Kenyan Diaspora must think beyond the norms and engage the government roll out a Diaspora Investment program aimed at enhancing the funding sources for Government projects in a more structured way.  A case in point is the very successful Diaspora Bond that was floated in Nigeria in June of 2017 to its Diaspora. The Nigerian government has finally looked to its citizens living abroad to put some money towards funding part of its $23 Billion record budget deficit. Issued during the last week of June 2017 at 5.625%, the five year bond raised $300 Million.

Fostering a savings culture among the Kenyans in the Diaspora by providing them with a safe and secure means of saving and investing is a key objective whose time has come. The Diaspora community has for a long time been trying to engage the government of Kenya in such matters. The positive side though is that the current government has been keen in listening to the requests being made. The only challenge before has been establishing a structure to actualize the investment requirement by the Diaspora, which is now being achieved through these Saccos.

There is still more that needs to be done in-order to have full government engagement in consumption of its yearly marked economic programs by the Diaspora community.

It is time we aligned our individuality with the national good of our Diaspora community to harness our collective resources to fund economic projects as our Nigerian friends have done. It is my belief that we can also chart a strategic direction that we’d like the government of Kenya to take in this regard. It begins with you and I participating in these institutions formed that we do control. In them, we can set the policies needed taking into account the needs of all members, improve structures and personnel to leapfrog the current thought processes of most leaders found in these organizations to a more modern thinking that is in tandem with  the advances made in these modern times. Only then can we then sit at the table with Captains of industry and Government to perform the needed economic revolution that improves our overall growth at all levels hence creating a greater Kenyan economy.

In conclusion therefore, I would urge us to: 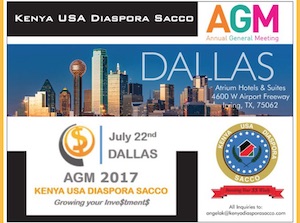 It is in this light that I also call on all Kenya USA Diaspora Sacco members wherever they are to rise up and take ownership of their institution and ensure that it lives to its name and stature by taking part in its AGM in Dallas, TX on the 22nd of July, 2017.

By Ralph Kilondu. Ralph is founder and member of the Board of Directors’ of the Kenya USA Diaspora Savings and credit Society. He sits as the Chair of KESSA Fundraising and Marketing Committee (FMC) and is a Businessman based in Atlanta with interests in several companies in the US and Kenya.